Let me introduce to you this part of the village where I live. It's about 10 minutes walk from my house- but this is special because it's a road we residents do not traverse on frequently. The pics show the road less traveled, a scenic road for me, and on top of that, this is where hubby and I catch the freshest breeze.
Here are shots I made today. 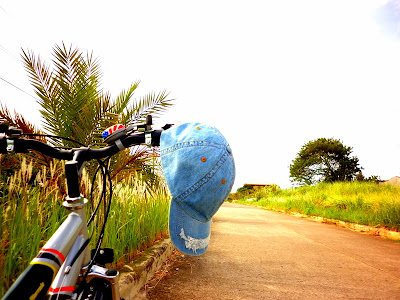 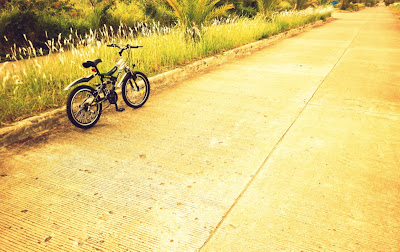 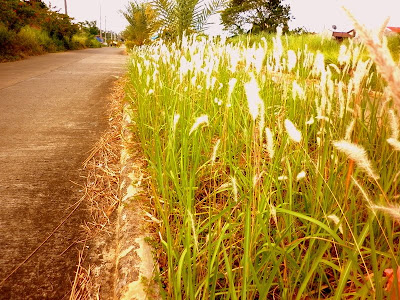 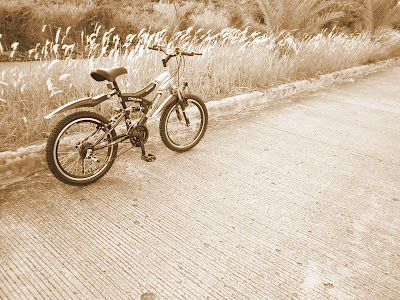 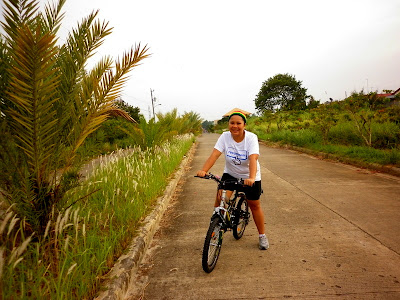 Oh, and this last one pic, I did not take. Eddie's snapshot of me (on the wheel).
This is the spot I was talking about in the previous post. We met Dreanna here, but today we did not see her since we went to this place a little early. The balmy weather allowed me to bike with smile.
Posted by Tarhata No comments:
Email ThisBlogThis!Share to TwitterShare to FacebookShare to Pinterest
Labels: fun, life, simplicity 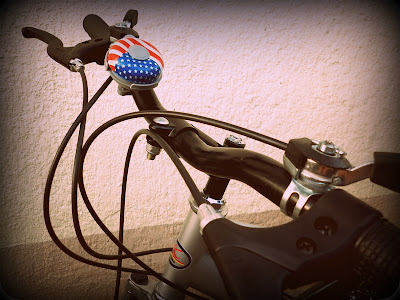 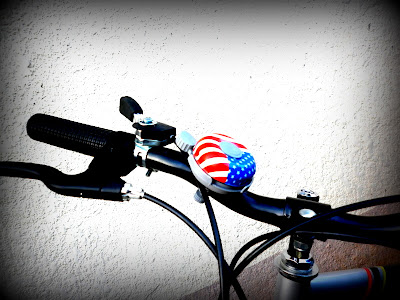 We have a little outing daily- a stroll at the other end of my community where no houses are built yet. I brought the new jump rope with me. I saw kids look with excitement at what I was doing: jog-skip rope on the way to that spot. I heard them say, "Look at her!". But I had to keep with my schedule since I still got tasks waiting to be completed. So no chit chat and play with the neighborhood kids yet.
Then at that place where the breeze is sweet, and the grasses are blooming and swaying with the wind: There was a young girl, about 4-5 years old, Dreanna was her name she told me, who was walking her white fluffy doggie. I asked her doggie's name. It was "Shamcey". And it was a boy doggie. I laughed hard at that.
Dreanna was quite overwhelmed with the jump rope I was holding and she was so busy with an adult's jump rope for a long while. It was too mis-matched for her size. But nevertheless she was so happy and crazy with it. As I was with it as well. And Shamcey quiet at the nanny's side, was without attention for a while.
With no choice because our newfound friend was so intent to have a great moment, Hubby and I were jumping rope with Dreanna. Her delighted screams were too apparent that she was having a good time.
It was getting dark, we saw stars peeping over the horizon. I had to tell her we need to get moving since it's already eventide. It was also hard to part with the little girl since she wanted her nanny to keep the rope and take it home with them while mumbling which to me was a mixed English/Japanese/Tagalog.
It was a great early evening. In every detail. Strolled, played, laughed. Yes it was indeed.
Posted by Tarhata No comments:
Email ThisBlogThis!Share to TwitterShare to FacebookShare to Pinterest
Labels: community, life, serenity

Life around the house

I share some shots I took today. Here they are. 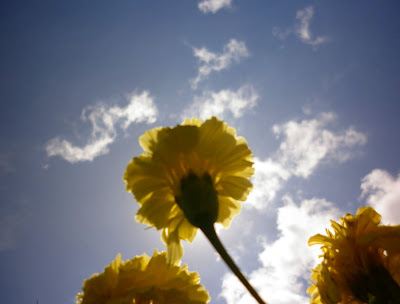 Yellow tagetes against the bright sky. 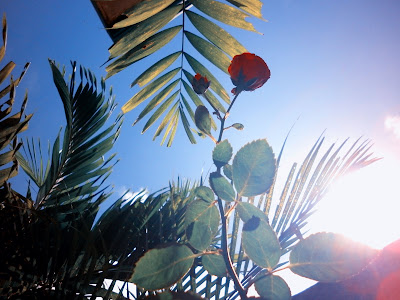 Rose and palm leaves
(I love how a bokeh was created in this shot!!) 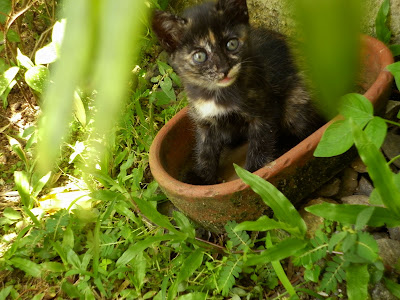 Meet Mikhayil!
I discovered the pet kitten inside an empty pot today ~ lol. 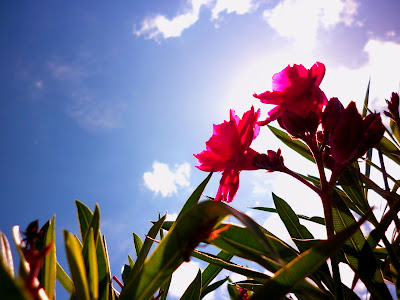 The Oleander plant that leans on our gate is so tall now. 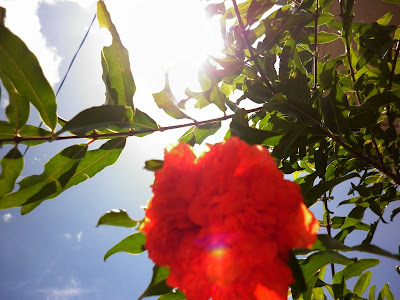 Pomegranate flower.
I've seen several on my shrub but they have not successfully developed into fruits. 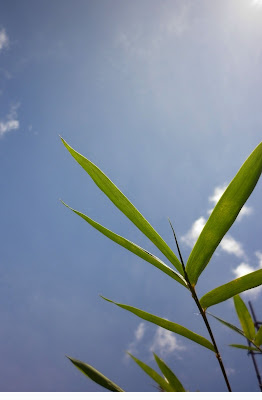 Leaves from the Thailand bamboo (Bambusa dolichomerithalla).
It was a souvenir from last year's countryside trips.

Let us skate well on the surface of life.
Let us belong to each other.
Let us clear out resentment and bitterness and be emotionally clean.
Let us rebuild our life.
Let us not give up on our aspirations.
Let us have time for stress relief and relaxation.
Let us grab the privilege of loving truly.
Let us continue in learning to be patient.
Let us be friends with ourselves.
Let us always carry a great sense of humor.

May we allow ourselves to heed them.

Tara
Posted by Tarhata No comments:
Email ThisBlogThis!Share to TwitterShare to FacebookShare to Pinterest
Labels: attitude, life, moving up

A Change of Lifestyle

I was in bad shape since Sunday night. That feeling that you won't be able to see tomorrow. I am like that when I get really sick.
So, this sedentary lifestyle is taking a toll on me. I am going to look for a place to workout and pursue my badminton again. Or else this blogger will be waiting early in the pre-departure area.
Wish me well. I need your prayers.
Take care of your lives, Lovees.
Tara
Posted by Tarhata No comments:
Email ThisBlogThis!Share to TwitterShare to FacebookShare to Pinterest
Labels: life

This is the kind of March that is so full of rain, chilly wind and thunderstorms. So I've thought of something to warm this depressing weather.
Here's a great brew for those who want to get refreshed especially on a cold day.
1 mug fresh ginger water (8 oz)
1 Lipton teabag
3 tablespoon evaporated filled milk
Brown sugar to sweeten
As most people dislike the taste of ginger, this was different. I personally say, it can be an addicting drink. The sweet, creamy, tangy, warm taste creates a good impression as you down it.
Ginger is full of benefits as well, to name a few:
For a recipe of a warming drink of another type, here's Haldi Doodh or Turmeric Milk for you.
Keep warm & stay up,
Tara
Posted by Tarhata No comments:
Email ThisBlogThis!Share to TwitterShare to FacebookShare to Pinterest
Labels: home, simplicity

“I have grown to believe:
That the one thing worth aiming at is simplicity of heart and life;
That one’s relations with others should be direct, not diplomatic;
That power leaves a bitter taste in the mouth;
That meanness and hardness and coldness are the unforgivable sins;
That conventionality is the mother of dreariness;
That pleasure exists not in the virtue of material conditions, but in the joyful heart;
That the world is a very interesting and beautiful place;
That congenial labor is the secret of happiness.”
~ Arthur Christopher Benson
What about you? Is there anything you have realized today?
Posted by Tarhata No comments:
Email ThisBlogThis!Share to TwitterShare to FacebookShare to Pinterest
Labels: attitude, life, simplicity, wonderful things
Newer Posts Older Posts Home
Subscribe to: Posts (Atom)